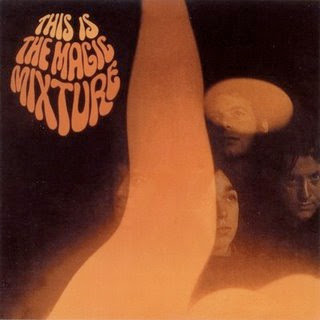 Here's the Magic Mixture Album from 1968

The liner notes on this reissue call the original 1968 album by the Magic Mixture "one of the most cherished artifacts of British psychedelia.” If you appraise records merely by their scarcity, then maybe that statement’s true. By all other standards, however, the sole release from this short-lived and largely unremembered band is mediocre.

At their best, as on "Urge to Leave,” the Magic Mixture summon up early Zombies comparisons, albeit without the pop sensibility. Prominent Hammond organ and earnest, amateur vocals by frontman/songwriter Terry Thomas rescue the 12 originals from stale city. Unfortunately, the songs themselves are mostly unremarkable, the production merely muddy rather than psychedelic, and the Clapton-lite guitar solos unnecessary. The latter sin tends to really drag down faster numbers like "You" that, with a lighter touch, could pass for a decent freakbeat single. Elsewhere, the dreamy ballad "Living on a Hill" meanders prettily but goes nowhere. The net result sounds less like a psych record than a performance by a mid-’60s stoned British bar band.

The album is chiefly remembered for "Motorbike Song,” a novelty number sung in what the liner notes take pains to tell me is a Somerset, rather than a Cockney accent. Though the comedic value is lost on this American, it’s notable that this is the only track on the album where the band sound like they’re having fun, exchanging their drug-addled haze for a deliberately primitive, almost Stooges sound.

The six hitherto-unreleased bonus tracks are interesting in that they showcase what the band were capable of doing with better material. In particular, organist Stan Curtis is given a chance to stretch out on covers of Spirit, Blood Sweat & Tears and Traffic, but Thomas sounds stretched. Rock historians may also note that two of the bonus tracks feature drummer Simon Kirke, who went on to dubious success in ‘70s bands Free and Bad Company.

Diehard collectors of ‘60s British rock will probably be happy that This is the Magic Mixture is back. Those looking for a classic timepiece worthy of mythic status, however, will surely be disappointed.

Dave Heasman said...
This comment has been removed by the author.
7:59 AM

Dave Heasman said...
This comment has been removed by the author.
8:06 AM